Now that the station’s exhibition area has been re-arranged to allow for social distancing viewing and the Lamp Hut project is on hold until a fully costing survey is pulled together to gain  a materials purchasing approval, work has moved back outside again with focus on the most southernly end of the platform which was looking neglected and a sight for sore eyes.

The first task was to replace the boundary fence which has been on the list for a long time. 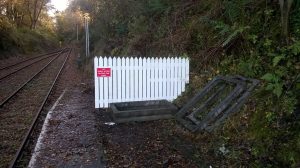 While the fence was being replaced work commenced on clearing the many years of overgrowth on the embankment a lot of which appears to be coming from the top of the bank. The intent is remove as much as possible of the vegetation that has slowly pushed out the safety netting to allow the netting to be pushed back and re-secured into the embankment. This will hopefully open up this end of the platform to more light and allow for planting up with the stations ever increasing collection of geraniums that have appeared after other parts of the station had been cleaned up of weeds. 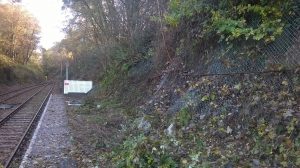 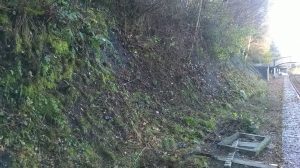