The line that runs through Birkhill today was originally part of the Slamannan & Borrowstounness Railway opened in 1851 as part of an expansion of the Slammann Railway, opened in 1840 between Arkbuckle & Causewayend.

The owners of the Slammann Railway wanted to revive the fortune of the company by creating an access to a dock facility / harbour to enable exporting opportunities for the minerals, coal and iron mined in the surrounding Slamannan & Monksland areas. Work commenced on the 5.5 Mile extension in 1849, extending the railway access to Bo’ness harbour from Causewayend and was completed in 1851, 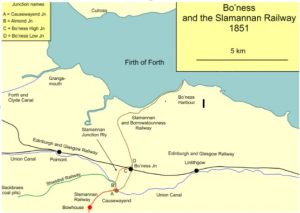 with the first revenue earning train, running on 17th March taking coal from Arden near Airdrie to Kinneil Iron Works. The train was driven by William Thomson, a prominent figure in Bo’ness at the time.

Initially the line was only used for freight services, however, the people of Bo’ness pressurised the railway company into establishing a passenger service between Bo’ness Harbour and the then Bo’ness Junction (located at Manuel) eventually the company agreed and the service commenced in 1856. The line continued to operate for 100 years, however, like many branch lines in the 1950’s & 60’s the line saw a decline in passenger usage and the passenger service ceased running in 1956. Freight services continued operating until 1975 when the remaining section between Kinneil & Manuel Junction ceased operations.

In 1979 the Scottish Railway Preservation Society acquired the line from British Railways and quickly commenced building a new section of line from Bo’ness to Kinniel colliery where it could join up to the old section to Manuel. Over the 1980’s, 90’s and 2000’s the Society slowly re-opened the line to Manuel in 2013.

To help increase traffic flow along the line work commenced on building a second platform at Birkhill. Making use of the loop line the foundations for the new platform commenced in 2017 prior to a new drainage system being installed down the centre of the two tracks joining an earlier drainage system laid in 2007. A rescued footbridge was erected in 2019.

It wasn’t until the SRPS took over the line that the idea of building a station at Birkhill came into being. The idea was to provide a stopping off point on the railway to provide access to the Clay Mine, which was being preserved as a Heritage site and tourist attraction, so in conjunction with Falkirk Council and the Bo’ness Heritage trust work commenced on reviving the line to where the station is today.

The line through the proposed station location was only single track width, so the whole area had to be dug out to widen for two track running to allow a loop to be installed. Luckily the Bridge at Birkhill had been made wide enough to allow twin tracks to go under.

The target for spring 1987 was to complete the relaying of track just north of the Clay Mine bridge, this consisting of a total of 28 new panels being laid and was achieved by the end of February 1987. Once all the panels had been laid, work commenced on bringing the line up to passenger standard from Kinneil Kerse (3.75km from Bo’ness) to the Bridge before stating to lay the new Birkhill loop and construction of the new platform.

However, after the completion of the track laying activity (phase 5 MSC scheme) work ground to a halt due mainly to the Falkirk District Council’s allocation of MSC manpower being cut and the Phase 6 MSC scheme start was pushed out from the end of February to May 1987, its target being making ready to passenger standard, the line between Kinneil and Birkhill by Easter 1988 to coincide with the reopening of the Clay Mine as a tourist attraction. The phase 6 scheme would see the construction of the run round loop at Birkhill, the West Platform and carrying out repairs to the Clay Mine Bridge. Earthworks was also undertaken by the Central Region Council MSC Agency as part of their work at the Clay Mine this included bringing the west platform to level and trimming the banking between the new platform and the mine.

In July 1987 a contractor (Dunsmore Brothers of Larkhill) was employed to finish off the earthworks for the track bed and drainage system. When finally completed the work had transformed what was known as the ‘Birkhill Canal’ into a well-drained compact track bed. 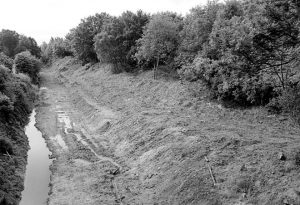 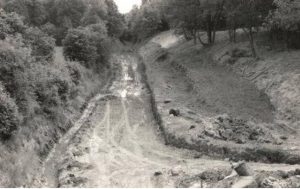 While Dunsmore Brothers where hard at work the resources of the Phase 6 MSC scheme (employing 33 people for 12 months) were split into two teams one focusing on the track while the second on the construction of the platform. 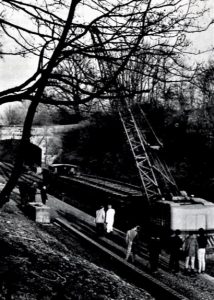 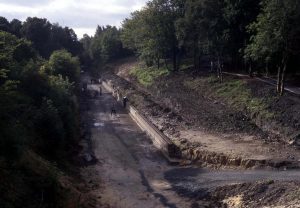 By spring 1988 the Birkhill extension was complete, however the track at Birkhill station had yet to be lined, levelled and Ballasted. The final phase of the MSC scheme was well underway completing the loop and extending the line to running order past the station to just short of the Avon viaduct creating a long head-shunt. A lot of the track used was reclaimed track from Kincardine Power Station.

Final fine lining and levelling work continued throughout the summer and autumn, this was after the Falkirk District Councils MSC squad had completed the basic track-work. The MSC squad also managed to erect 1500 metres of new fencing which replaced damaged and missing lineside fencing.

Over the winter months of 1988 / 89 the Station building albeit a shell at this point was erected and by February the line was finally ready and was inspected by Major Olver of the Railway Inspectorate who passed it fit to operate passenger services.

On Saturday afternoon of 25th March 1989 No.419 finally pulled the first train into Birkhill Station and the railway was open to Birkhill. The official opening, however, was not until Friday 5th May 1989 to coincide with the opening of the Birkhill Fire Clay Mine as a tourist attraction. Charles Sneddon OBE OStJ JP, Convenor of the Central Regional Council performed the official openings of the station and mine. 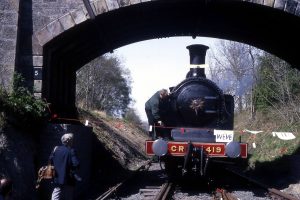 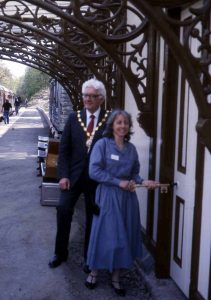 Apart from general maintenance and station up keep, no major works was undertaken until late 2006 when it was decided to extend the platform to cater for longer trains to support events such as the Santa Specials and Thomas the Tank Engine Weekends.

The upgrade work commenced in early spring 2007, clearing out the drainage systems and the installation of a new North Point Relay and after battling with flooding the relay was completed at the end of March.

To enable the platform to be extended, the loop also had to be lengthened but to do this additional land had to be purchased from the Farm owner of the adjacent field, enabling the creation of the access down to the loop for the heavy machinery needed for the earthworks and track replacements. Excavation works commenced at the end of June continuing right through to October, however, it was not plane sailing as during the re-shaping of the South East Embankment an old Badger Set was found and work had to be stopped until it was fully investigated.

November 2007 the digging out of the platform extension foundation commenced, however it wouldn’t be until the first week in May 2008 before the last of the copes where laid and the 45 – 50m extension was complete.

Sadly in 2013, due to spiralling health & safety costs the Clay Mine Museum was finally closed which left just the country walks as a stop off attraction, however in the depths of the society there had been talks for sometime to develop the station into a signalled passing station which would include a second platform and signal-box and so in the Autumn of 2016 the society established an appeal which allowed work to commence in 2017. The main foundations of the platform have now been completed and the refurbished ex West Calder footbridge was installed in September 2019.