During the great Ice Age (about 13,000 years ago) a glacier occupied what we know today as the Forth Valley. At this time, the sea level was about 150ft or 45m higher than it is currently.

A subsequent fall in the sea level caused the river to erode the gorge.

Until 10,000 years ago the climate and scenery was very much Siberian in aspect. As the Ice sheet retreated and the weather improved the fauna began to recover and trees such as Juniper, Birch & Crowberry grew in abundance. 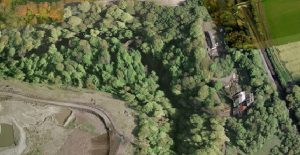 Man made little impact on the woodlands until the invention of better cutting tools and the rise of permanent farming communities around 4000 years ago. This lead to the land being cleared for farming and an increased demand for wood for charcoal & salt production and building timber. Almost all the woodland in the area disappeared other than what can be seen today.

What is Fire Clay

Fire clay is often found close to coal mine deposits and contains high percentages of Alumina & Silica, because of this it has a very high fusion and melting point and once worked and fired it can withstand extreme temperatures such as those found in kilns, furnaces, chimneys, flue liners and steam boilers. Fire Clay bricks that where produced at Glenboig were fitted in the boilers of the Cunard – White Star liner Queen Mary built by John Brown on the Clyde in the 1930’s. 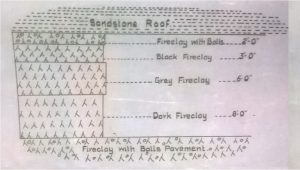 Situated within the steep sided gorge of the river Avon, 1.5 miles southeast of the Grangemouth Refinery and 2.5 miles southwest of Bo’ness, Fireclay deposits had been exploited since at least the 18th century.

The oldest shaft was situated on the east of the river, just north of Tod’s Hill originally excavated in the 19th century and mining continued until the beginning of the 20th century. In 1906 a Bradley & Craven Steam mill was installed to enable clay processing to take place, the steam mill provided power for the crusher, pump, and Pulley system. During the 1930’s electricity  was installed and the steam mill was replaced with a 65hp Fawcett Incla Mill which could process 10 tons of clay per hour compared to 1 to 2 tons per hour of the Bradley & Craven mill.

Birkhill was leased from the Hamilton Estate in 1908 by Mark Hurll, a firebrick manufacturer from Glenboig in Lanarkshire and in 1916 the partnership of P&M Hurll (established in 1887) acquired the mine itself.

The second series of workings were further north, and opened by P&M Hurll in 1913

The third and largest shaft was opened in 1951 at a cost of £25000. It was situated to the west of the river Avon and was approximately 2250ft across & 200ft deep and was accessed via bridge across the river.

In July 1980, P&M Hurll went into liquidation and the pump which had kept the mine free of water was turned off. By the end of 1981 the workings were merely subject to periodic inspection as they slowly filled with water. The Bo’Ness Heritage Trust acquired the mine and with funding from the Falkirk District Council operated the mine as a visitor attraction. When the Heritage Trust closed in the 1990’s, responsibility for the mine transferred to Falkirk Council. Birkhill Fireclay Mine closed permanently in 2013.

There is little left of the mining operation other than incline haulage track, the weighbridge building and miners cottages which have since been converted into a family home. The rail route used to take the fireclay away is still just about visible however the track and track bed itself was removed during the processing plant demolition.

Fire-Clay was minded by the “Stoup and Room” method. The “stoup” was a wide pillar of fire-clay left in place to support the roof while the “Room” was the chamber left between the pillars, in the intersecting galleries or “roads”, after mineral extraction. Little timber or pit props where needed to further support the gallery roofs. All excavation was manual and on average the clay face advanced 4 foot per day.

Men worked in pairs. Holes were drilled in rack with a hand borer or “ Rickety”. Rock was then blasted down with explosives last thing at night to allow the dust to settle. In the morning fire-clay was shoveled into hutches and pushed along to the main hutch-line. The miners would put on a tag to identify the load as being theirs. The hutches were collected down the mine and hooked on to a haulage system by a man called a “Bencher”. They were hooked on at precise intervals.

Each team of Miners would shift about 10 tons of clay per day, they had a target of about 15 hutches full per day, for which the 2-man team would receive 2 shilling & six pence in 1939. An example of a hutch can be seen on the platform of Birkhill Railway Station.

Miners were not allowed into the mine until it had been checked for safety by the “Fireman”. Miners had to buy all their own tools, i.e. picks, shovels, lamp carbide, clothing etc. No safety equipment was issued.

Once the clay had been loaded into the ‘Hutches’, it had to hauled the 300m to be Milled which was done using a narrow gauge inclined railway, the tracks of which and an example of a Hutch can still be seen today. 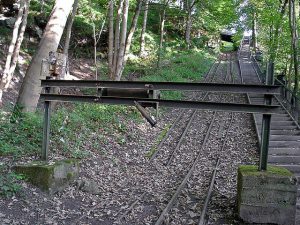 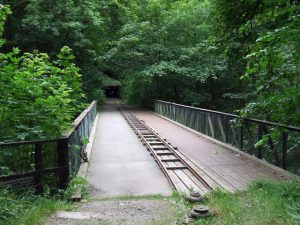 On each journey, 12 fully loaded hutches carrying a total of 12 tons of clay were pulled up the incline passing 12 empty Hutches in a loop system at the top of the incline. 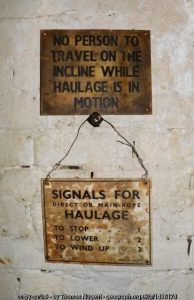 Coded messages of bells told the winchman when to start and stop the haulage, for safety reason miners were forbidden to travel on the haulage system

The Raw clay from the mine had to be broken down into smaller more manageable pieces this was done through passing the clay first of all through a Kibbler and then further refined in the Pan Mill before being screen into two grades one for the production of refractories and one for export, it was then stored in a Hopper ready for transportation to the owners (P&M Hurll) brickworks site at Glenboig or direct to other fire clay users within the UK and overseas to areas as diverse as Pen Ang, the Philippines, Manilla and Afghanistan via awaiting ships at the docks at Bo’ness and rail to Glenboig and further afield.

The Steam driven Mill produced up to 3 tons of clay per hour, the throughput was increase to 12 tons per hour when the steam mill was replaced with electric power.

The following link show a collection or pictures of inside the mine when it was a tourist destination plus pictures of the disused processing plant, prior to its demolition: – Birkhill Fireclay Mine & Buildings