Busy week up at Birkhill

Work re commenced on the 120 plus year old grounded North British 3rd Class 6 wheel carriage circa 1890-99. Due to time constraints we have decided to strip off the old cladding a section at a time using the new weatherboard lengths as a measure to how far we can get in a shift. The old wood did not give up much of a fight, but the way it had been previously fitted quickly revealed the lack of protection it had actually given to the lower sections of the coach frames. As previously reported the floor condition was known to be bad but the water ingress behind the old boards from the coach window down has taken its toll. Once all the old wood had been removed the frame was brushed down and painted with wood preserve to help save certainly the upper timbers. Because of the damage caused by the water ingress we decided to fit the new cladding on stand offs which we hope will give it a water tight covering and at the same time provide a small gap to allow the timbers to dry out completely. A new project page on this website will be put together shortly to provide a pictorial view of work done to protect the carriage a little longer until it can be restored to its former glory! 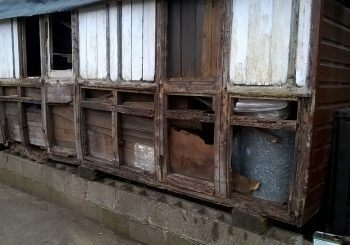 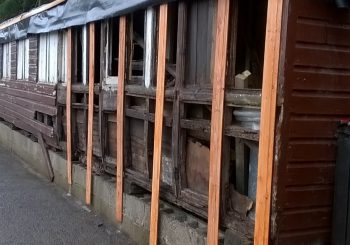 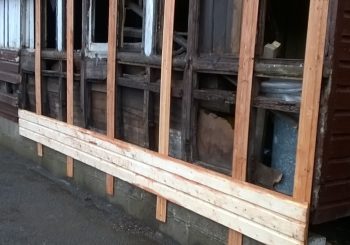 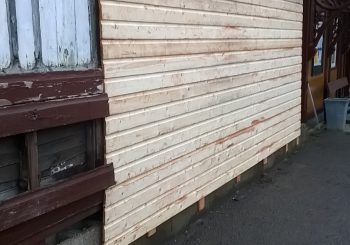 Meanwhile the Monday squad have continued there great job in building the retaining wall around the footbridge foundations on the West Platform, we are looking forward to its completion so that we can hopefully get it ready for summer planting. 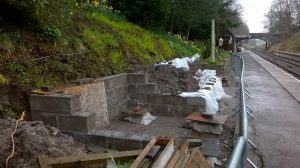 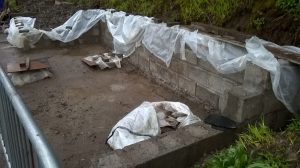